Thanks to the hard work of local organizer prof. dr. Armin Stock and our programme committee, the preliminary programme for our 2013 conference in Würzburg is now available. You can find it through this link to the conference website.

Also, allow us to gently remind you to pay your annual dues. Each contribution is appreciated and helps us to financially support those who need it to come to our conference. Thank you for contributing! 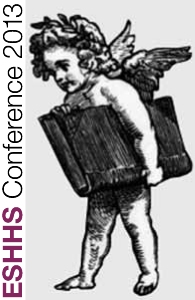 As you might have read in our last mailing, Armin Stock has launched a website for our upcoming conference in Würzburg. You’ll find information there on the conference location and the program, on accomodation and how to get there. There is also a very helpful document with information on interesting sites, museums, guided tours around Würzburg and so on.

Proposals are welcome for spoken papers, posters, workshops and symposia, and should be submitted before March 31st, 2013.

More information can be found in the document that can be dowloaded through the following link.

We are glad to announce that the next conference of the ESHHS will take place from 30th of July to 2nd of August 2013 at the Oswald Külpe Lecture Hall at the University of Würzburg, Germany. Local organizer is Prof. Dr. Armin Stock from the Adolf-Würth-Zentrum für Geschichte der Psychologie, who has been so hospitable to invite us. We hope to meet old friends and welcome new faces in lovely Würzburg!

A call for papers will follow in due course.

The Cheiron/ESHHS joint conference will be held July 18 to 22, 2012 at Dawson College in Montreal, Quebec, Canada.

Information about the conference, registration and accomodation can be found on the Cheiron conference site.